Book our private tour in Toledo and be amazed by a city with one of the richest histories in Spain. Also known as the “Imperial City”, Toledo was Spain’s former capital, and its narrow streets have been witness to major historical events.

As the capital of Spain, of course, Toledo was also the scene of terrible battles for power among kings, nobles and powerful archbishops of the Catholic Church.

But if there’s one thing Toledo is known for, it’s its incredible cultural heritage that dates back more than 2.000 years. On this private guided tour of Toledo, you will see ancient mosques from the Islamic period, medieval synagogues, and one of Europe’s most spectacular gothic cathedrals.

[Check all our private tours in Madrid here] 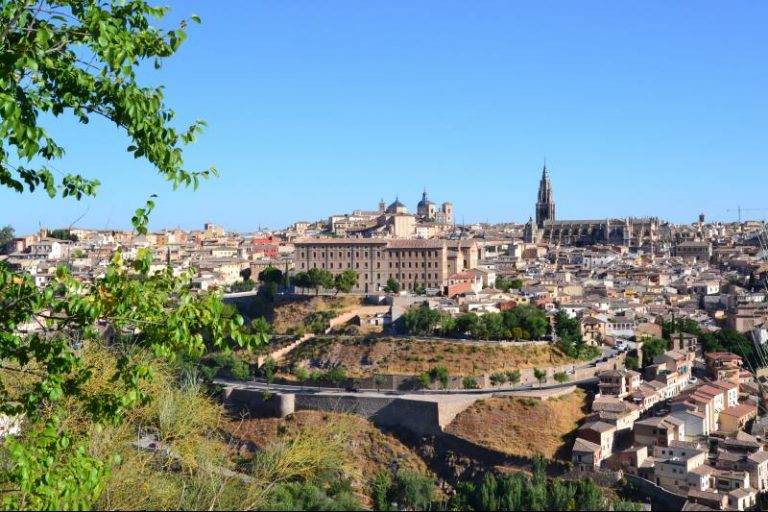 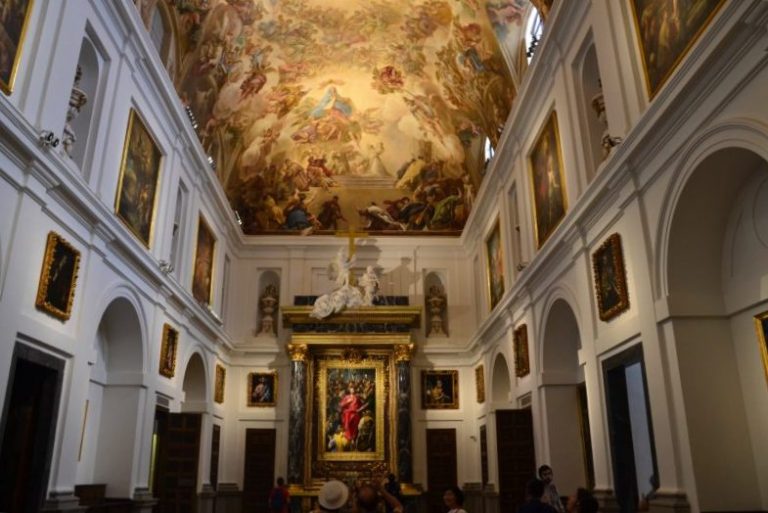 As a private tour, the start time is completely flexible. We can adapt to the specific needs of your group.

With regard to the duration of our Toledo private tour, we basically offer two options:

Also, if you would like to make your tour of Toledo longer or shorter, we can change the duration with no trouble at all.

Within the duration of the tour is included traveling to Toledo and back to Madrid.

Prices of our Private Tour in Toledo

The price of this private guided tour of Toledo is:

If you need to buy train tickets to Toledo, you can do so at www.renfe.com

Private Transfer to Toledo from Madrid

Do you need private transportation from Madrid to Toledo? We’d be happy to arrange this for you. We collaborate with transport companies with a modern fleet of vehicles (Mercedes Benz).

A vehicle will pick you up at your hotel or chosen meeting point, take you to Toledo, and then take you back to Madrid after your visit.

You will also enjoy the best panoramic view of Toledo. Private transfer is great if you want exclusivity, comfort, and flexibility.

If you prefer, you can also take a train from Madrid to Toledo instead of the private transfer.

Another option is to take the train from Madrid to Toledo from Puerta de Atocha train station. Our guide will meet you at the train station, take you to the platform and travel with you to Toledo. This train ride takes less than 30 minutes.

-The price is 24€/person for the return ticket.

But otherwise the Old Town is perfect for walking.

What people say about us:

Tatiana is a wonderful guide - full of information, historical stories and amusing tales. Absolutely entertaining and informative. Tips for good places to eat, too. I couldn’t recommend highly enough. A delightful tour and great way to start a Spain holiday

Tatiana was amazing, she is so kind and knows her way around the Center of Madrid perfectly! I loved her energy, her English is perfect, she was so helpful, and the tips and hidden gems are not a joke, you will know and remember all of them, because she brings the information so naturally. She is just an awesome guide! Would 10/10 times recommend and tell all my friends to book a tour with her when in Madrid!

Our guide was so enthusiastic and showed us the lovely places/buildings and streets with its own history. It was such an amazing tour. She also showed us some of the best places to eat or drink. I strongly recommend doing the walking tour with OgoTours tours, you will not regret it!

Our guide was charming, well prepared, and very knowledgeable. We saw and learned things that were not in any of our guidebooks. We got into places that one could never get into on one’s own. I could not recommend this more highly
Previous
Next 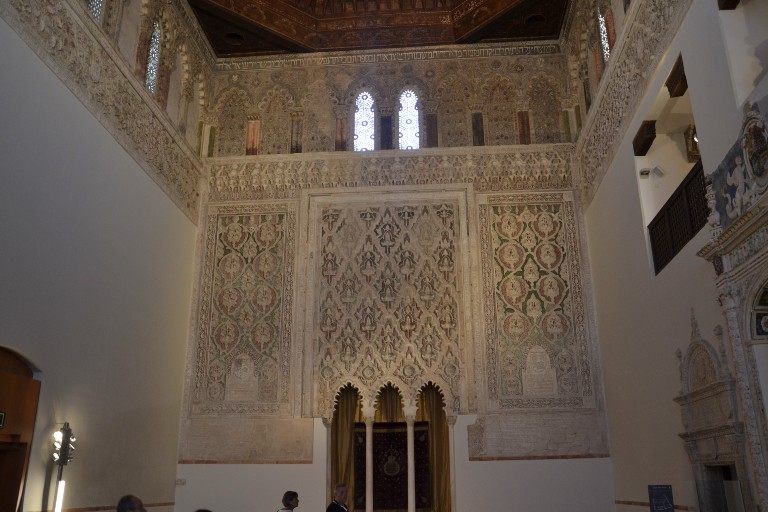 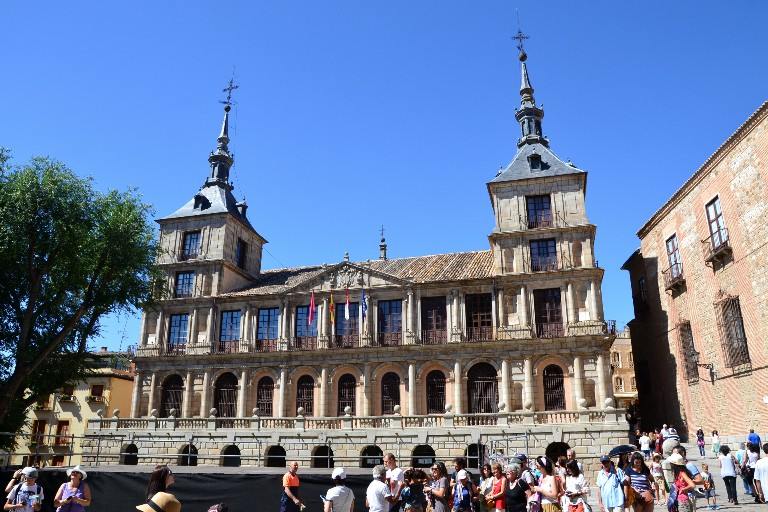 On this private guided tour of Toledo, you will learn the history of this fascinating city in depth, from its founding to modern day. All this, along with oddities, hidden gems and legends that make the visit fun and engaging.

For more information and to learn about the main stops on the tour, click on the drop-down menu.

The Sinagoga de Santa María la Blanca is one of the few medieval synagogues remaining in Spain. Built by Muslim stonemasons who lived in Toledo, the building is notable for its architecture and decoration. Today, the building is not used for religious services, and is used exclusively as a museum.

One of the most important churches in Toledo. Its founding dates back to the 12th century, when Christians converted an old mosque into this Catholic church. However, the building as we see it today dates back to the 14th century. Today, this is one of the most-visited churches in Toledo because it is home to the painting “El Entierro del Conde de Orgaz”, a masterpiece by El Greco (16th century).

Without a doubt, one of the most imposing gothic cathedrals in Europe. Like other Christian houses of worship, the Catedral de Toledo was built over an old mosque, in this case over Toledo’s principal mosque. Construction on the cathedral began in the 13th century and ended during the reign of the Catholic Monarchs (1493). In addition to its spectacular architecture, inside the cathedral you can admire the remains of important kings of the House of Trasámara dynasty (1366-1555) and the amazing Treasure of the Toledo Cathedral.

This small, ancient mosque from the 10th century is the best surviving example of Islamic architecture in Toledo. When the Christians arrived, the mosque was converted into a church. Fortunately, the original structure of the building was preserved.

This breathtaking monastery was commissioned by the Catholic Monarchs in the 15th century to commemorate the victory of their troops in the Battle of Toro (1476). Architecturally, the building is a jewel of the Spanish gothic style that you won’t want to miss.

The word Sephardic refers to Jews who lived in Spain and had to flee the country in the 15th century. In this museum, you can learn about the Sephardic Jewish community, their life in exile and their persecution in the Inquisition. What’s more, the Sephardic Museum is located in an old medieval synagogue.

An iconic medieval (13th century) bridge that crosses the Tagus River. The views of the city from here are astounding. The bridge even retains the defensive towers that restricted access to the city and allowed for the collection of taxes.

Why to choose OgoTours for your Private Tour in Toledo

Enjoy an authentic experience in Toledo. Discover hidden areas away from the tourist thoroughfares, learn about local traditions and immerse yourself in the city's history. Our local guides will make you feel like a local here in Toledo.

OgoTours offers guided tours exclusively in Madrid and surrounding areas since 2013, making us one of the most experienced companies in the city. Specialization in a destination is essential to provide you with excellent service.

We know that setbacks happen sometimes. That's why all of our guided tours have a flexible cancellation policy. Cancel your Toledo guided tour for free up to 72 hours before start time.

We work exclusively with expert professional guides. Our tours have more than 1.000 real reviews on major platforms like TripAdvisor and Google. Plus, prestigious publications like DK Eyewitness Travel Guides (UK) and WELT (Germany) recommend our guided tours in Madrid.

How to book your private guided tour in Toledo

Booking your Toledo private tour is easy and convenient. Just fill out the form on this website and select the date and number of people. If you will need private transportation, please make sure you indicate this.

In less than 24 hours, our team will contact you to arrange the details of your tour.

When you’re on vacation, you want some flexibility. All sorts of setbacks can occur. That’s why our customers enjoy a flexible cancellation policy on all of our guided tours.

Cancellation is absolutely free on your Toledo private guided tour up to 72 hours before start time.

Cancellations between 48 and 72 hours before incur a penalty of 50%. Cancellations with less than 48 hours notice are nonrefundable.