Gran Via Avenue is popularly known as the Spanish 5th Avenue: fashion franchises, cinemas, theaters, jewelers, restaurants, etc. make this street one of the commercial and tourist epicenter of Madrid. Among its many attractions, you cannot miss the astonishing architecture: domes, impossible facades, buildings influenced by French trends or the first skyscraper in Europe (Telefonica Building). 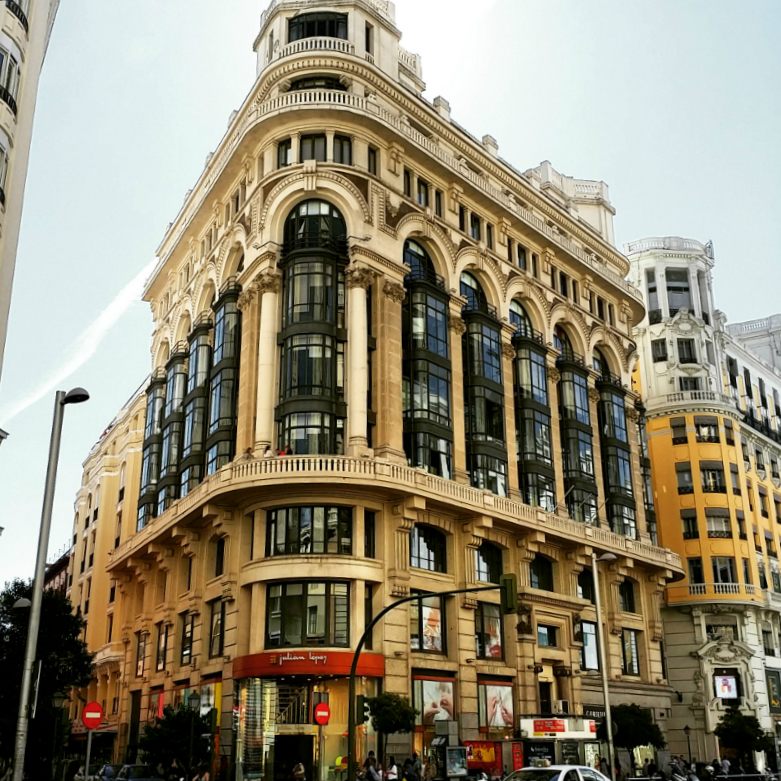 In this picture we can see Casa Matesanz which was built in 1923 by Antonio Palacios, one of the most prestigious Spanish architects at that time, and became one of the first American-style shopping centers in Europe. The building is absolutely beautiful and probably one of the best examples of what this emblematic street offers to architecture lovers. TIP! If you want to enjoy the best views of Gran Via Street, you can climb to the lookout located in the Cybele Palace (€2).Absolutely worth it! 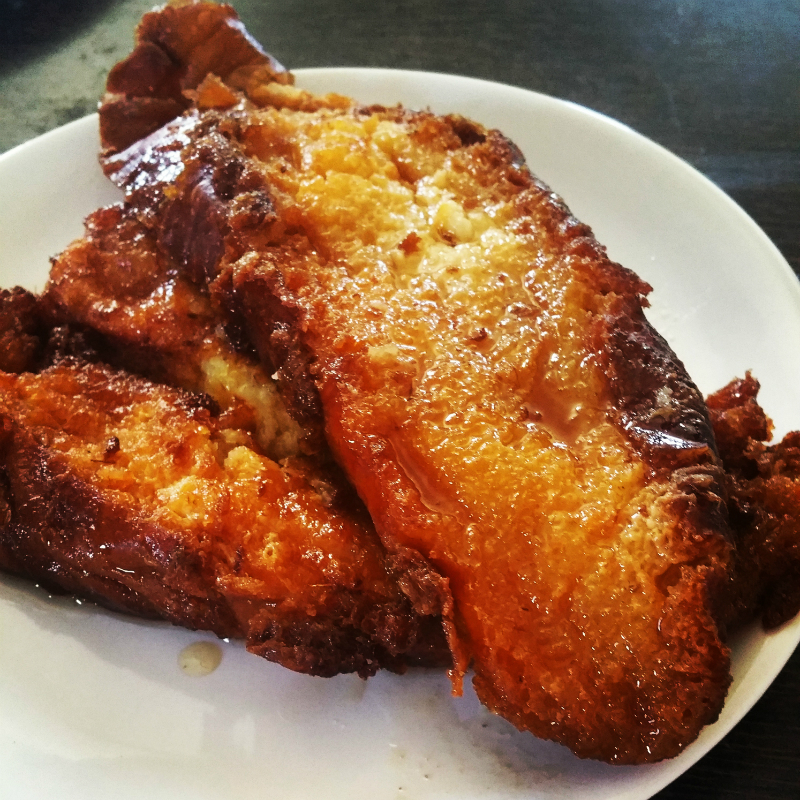 Easter is a time of celebration in Spain and Madrid is no exception. Processions take to the streets, thousands of faithful throng the churches and the smell of incense permeates the air all around. One of the most deeply rooted traditions during Easter are “Torrijas”, a kind of French Toast, which are prepared in Spain since the fifteenth century. According to Catholic tradition, during Lent was not allowed to eat meat, so people ate less bread. Housewives used leftover bread to prepare this delicious sweet. Learn how to make genuine Spanish Torrijas here!

Many tourists wonder what these small golden plates in the ground mean. These plates are nothing more and nothing less than a tribute of the City Hall to those businesses that have been operating at least hundred years or more. This is easy to say, but so many years it is, undoubtedly, a great blessing! Amazingly enough, the variety of these centenary businesses is huge, from pharmacies, restaurants or libraries to a shop specializing in cork! 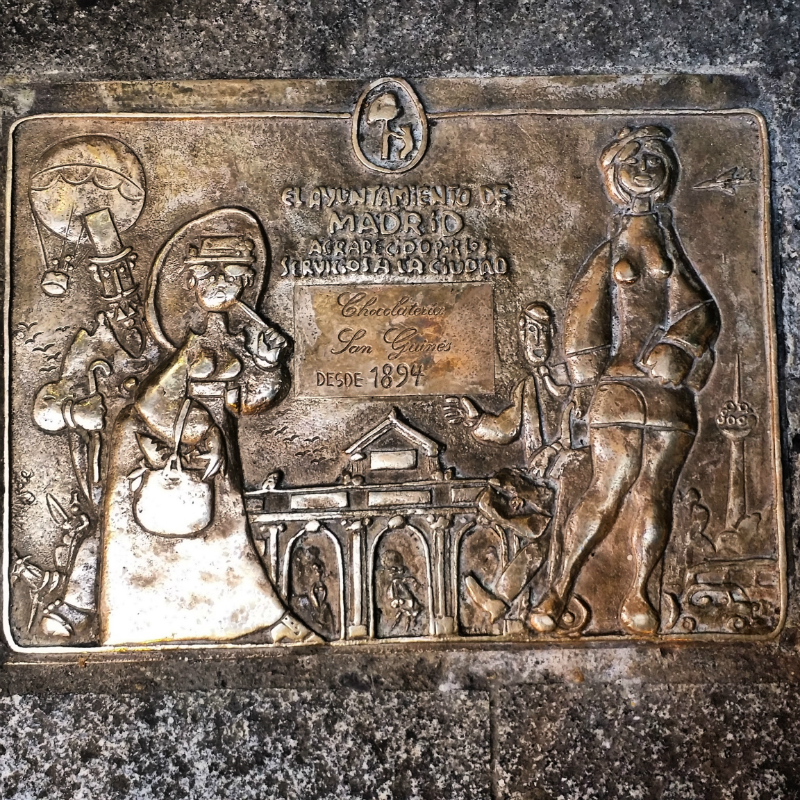 Enter one of these businesses is like travelling back in a time machine as they maintain the unbroken tradition from generation to generation and preserve the taste of the truly authentic (wooden desks, antique chandeliers, marble floors, etc.). During our Free Tour in Madrid we will have the honor of visiting the interior of Botin Restaurant, the oldest restaurant in the world! This restaurant opened its doors in 1725 and has become a gastronomic symbol of the Spanish capital. More info: www.centenariosmadrid.org

This beautiful part of Madrid hides incredible stories in every nook and cranny. Located just 5 minutes’ walk from Puerta del Sol, this small neighborhood was inhabited by all the great geniuses of Spanish literature: Cervantes, Lope de Vega, Calderon de la Barca, Quevedo and many more. This period, known as the Golden Age of Spanish Literature (16th and 17th century), was insuperable. The literary activity was frantic and all those who sought success came to this neighborhood. Unfortunately, little remains of the original neighborhood. Most of the old adobe buildings were demolished and beautiful buildings of the nineteenth century were designed instead. However, verses from famous works decorate the paving as you walk along them and remind us that once this part of Madrid was the world epicenter of literature. More info: www.barrioletras.com. 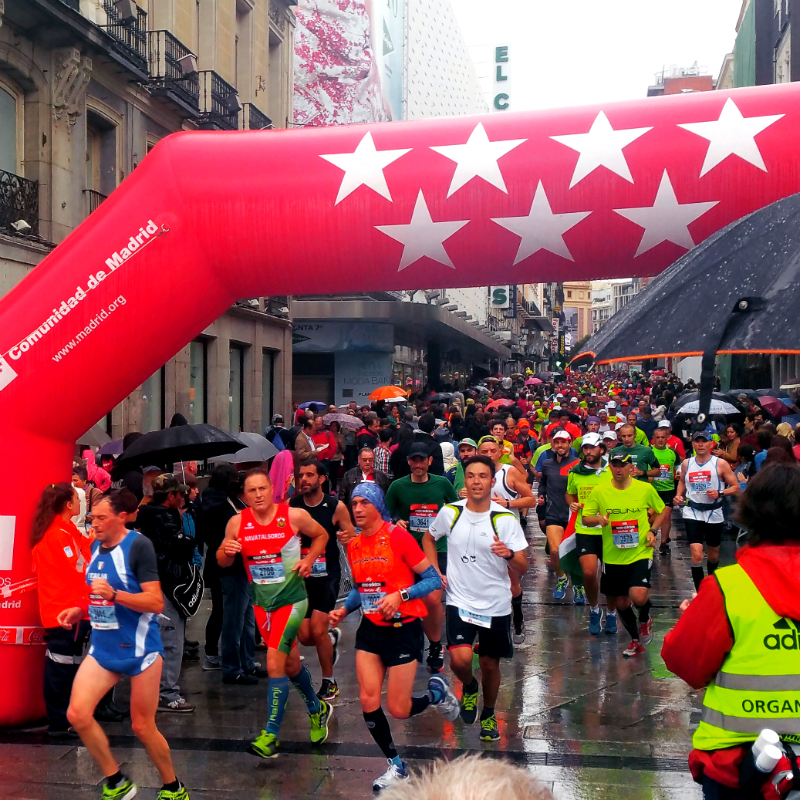 As every year, the long-expected day for running lovers arrived, the Rock ‘n’ Roll Marathon. Not even the heavy rain couldn´t ruin one of the sporting events of the year in Madrid and the Marathon saw a record number of participants (15,000 runners)! The Rock ‘n’ Roll Marathon Series was born in the United States with the intention of combining running with live music. Throughout the course music bands liven up the atmosphere, becoming the Marathon a huge party. Currently 33 cities in Europe and the United States are part of this fantastic initiative. The undulating course and the altitude of the city (650 meters above sea level) make this marathon in one of the most physically demanding in Europe. By the way! The winner, for the second consecutive year, was the Kenyan Ezekiel Chebii.