There is a popular saying in Spain that goes “De Madrid al Cielo” which literally means “From Madrid to heaven”. Honoring this popular saying, we want to show you the best places in Madrid to enjoy the greatest views of the city.

Faro de Moncloa is one of the tallest buildings in Spain

Undoubtedly, the Faro de Moncloa offers the best views of the city. This huge tower was built in 1992 in the northern part of the city and measures 112 meters (367,5 ft). A panoramic elevator covers the 92 meters (301 ft) from the ground floor to the viewpoint.

Arch of Victory from Faro de Moncloa. This triumphal arch was built during the Franco dictatorship in memory of a battle that took place here during the Spanish Civil War (1936-1939)

This tower is one of the tallest buildings in Madrid, so it is the perfect place to get a great view over the whole of Madrid and– on a clear day – beyond. From up here you can admire the entire Old Town, the Royal Palace, the financial center and even the peaks of the Sierra de Guadarrama mountain range.

In 1968 the Egyptian government donated to Spain this ancient Egyptian temple. Since then, it has become one of the most visited places in Madrid. The temple was located on a small hill from which we can contemplate the southern part of the city: the Royal Palace, the Almudena Cathedral, the Manzanares River, Vicente Calderon Stadium and the huge Casa de Campo (one of the largest public parks in the world) where kings hunted in the past. The temple is 100 meters away from Plaza España (Square of Spain).

This colossal building, former headquarters of the Spanish Post Office, is one of the city´s landmarks

This building is undoubtedly one of the icons of the city. It was designed entirely by Spanish architects to house the headquarters of the Post and Telegraph Service in 1919. In the early 21st century the building was restored and became the City Hall. Although many people do not know, the Madrid City Hall is open to tourists who can climb to the eighth floor and enjoy the best views of the city centre. From up here you can admire the Cybele Square, Gran Via Street, the Retiro Park and the Paseo del Prado Boulevard, one of the busiest parts in Madrid. To the North you can also see the financial center of the city.

Address: Plaza de Cibeles, 1
Price: 2€ / The maximum duration of the visit is 30 minutes.

The Círculo de Bellas Artes is a private, non-profit, cultural organization that was founded in the late 19th century to promote all kinds of cultural activities: literature, cinema, philosophy

This rooftop, located in the heart of Madrid, offers wonderful views of the city centre. Although Circulo de Bellas Artes is located quite near the Cybele Palace, the views are different and worthwhile. In addition there is a nice bar where you can chill out, have a drink and enjoy the breathtaking views of the entire city. In summer this rooftop terrace is one of the trendiest places in Madrid. Do not worry for the summer heat, there are water mist sprays that cool down the atmosphere during the scorching days.

Cable car is not exactly the ideal place for those who has an inherent fear of heights. For anyone else, the cable car will be an fascinating experience! The journey takes 11 minutes and at its highest point reaches 40 meters (131ft). As you can imagine, the views are spectacular: the Royal Palace, the Cathedral, the old train station Principe Pio, the Manzanares River and the Casa de Campo Park. The cable car leaves you on the other side of the Casa de Campo where there is a cafe with panoramic views. Children will have a great time!

Where to take the cable car? 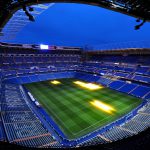