The Muslims were extremely important for the development of many cities in Spain, especially Madrid. Many locals do not know but it was the Muslims who founded Madrid in the nineth century. In fact, the name of Madrid comes from the Muslims who named the city “Magerit” or “Maydrit” which in ancient Arabic meant “water-rich city“. Unfortunately there are hardly any archaeological remains of this period.

However, it was in 1561 when Madrid´s future changed forever. King Philip II moved his court from Toledo to Madrid and the old Alcázar (former Muslum fortress) was renovated and became the Official Residence of the Royal Family. During these years population shot up and a large number of buildings were constructed to meet the changing needs of the new capital of Spain.

The seventeenth century was a period of profound change in Europe. The Spanish Empire slowly weakened and France emerged as the new power in Europe. The most emblematic work of this period is Plaza Mayor. This historic square soon became the epicenter of Madrid: all major events and celebrations of the moment took place in this popular square.

During the eighteenth century the city underwent a process of urban renewal and expansion. King Charles III, nicknamed “The King Mayor”, ordered the construction of incredible buildings such as Puerta de Alcalá, the old Postal Office, the Botanical Gardens or the Royal Cabinet of Natural History which later would become the Prado Museum.

The nineteenth century was an extremely turbulent century in Spain, marked by wars and economic crisis. It is estimated that only the War of Independence (1808-1813) against the French killed more than 300,000 people. Despite this, tourists can also enjoy wonderful buildings from the nineteenth century (Bank of Spain, Atocha Train Station, the Royal Theatre or the Almudena Cathedral)

The first two decades of the 20th century were a period of prosperity for Madrid. Spain did not participate in the First World War and large amounts of foreign capital left Central Europe and fled to Spain. This resulted in the construction of great buildings and the design of grandiose urban projects such as the Palace of Communications, Gran Via Street, Telefonica Building (the first skyscraper in Europe), Plaza España or the Hotel Ritz (the first luxury hotel in Madrid).

Today Madrid is a cosmopolitan city and one of the largest financial centers in Europe. A vibrant and culturally active city: museums, theatres, exhibitions, concerts, operas, bullfights, etc. If you like modern art, don´t forget to visit Reina Sofia Musum which is considered one of the best Modern Art Museums in the world. To discover the 21st century Madrid, you will have to visit “Cuzco” and “Nuevos Ministerios” area where the skyscrapers and modern buildings are located.

Prepare your trip to Madrid with OgoTours! Click here and download a free city map of Madrid. If you want to discover Madrid and its fascinating history, don´t think twice and book now your spot for our Free Walking Tour in Madrid. The best way to enjoy Madrid like a local! 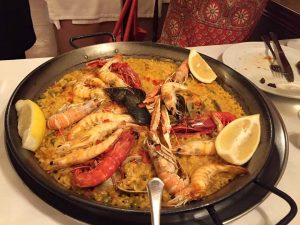 Where to Eat Paella in Madrid

Where to Eat Paella in Madrid Gastronomy plays an important role in our Free Tour in Madrid. Spain is a country where food is taken 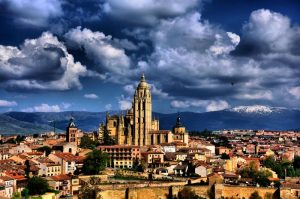